Causes and Remedies for Infertility

Causes and Remedies for Infertility : Baby-making seems easy. There is a lot of education, even anxiety, around preventing unwanted pregnancy once we become sexually active. But many couples dealing with infertility would dispute the notion that getting pregnant is as simple as shelving birth control. Dr. Jamie Grifo, program director for NYU’s Fertility Center, sees struggling couples in his clinic every day.

“Understanding how much infertility can impact your life can help you make better decisions about when you start and how you go about it,” said Grifo.
To assist with that goal, here are answers to five frequently asked questions on infertility.

How common is infertility?

Infertility is classically defined as a year of trying unprotected sex without conception. Infertility today affects one out of every six couples.
“The reality is that it’s much harder to get pregnant than many of us believe,” said Grifo.
It used to be thought that infertility was primarily a woman’s problem, but that is not the case. Men and women are affected almost equally, with 30% due to male factors, 30% due to female factors. The other 40% is often due to a mixture of problems, or is referred to as “unexplained.”
But the trend today is putting more of the focus on women.
“The social trend of delaying childbearing — the older age of women when trying to conceive — is the single biggest factor in infertility today,” Grifo said.

What causes infertility in women?

Irregular menstrual cycles are a common reason for infertility. Absent or infrequent periods, prolonged and excessive bleeding, and bleeding or “spotting” between periods can all make it difficult to predict when ovulation will occur so that a couple can make a baby.
There are also a number of diseases and conditions that can contribute to infertility. Smoking and weight also play a role. Smoking can reduce a woman’s chances of getting pregnant by affecting ovulation, and miscarriage occurs at a higher rate among pregnant women who smoke. And according to the American Society of Reproductive Medicine (ASRM), about 12% of all cases are because a woman weighs too much or too little.
But many experts believe age is the biggest cause of female infertility, playing more of a role for women than for men. “If you look at fertility curves, there’s about a 50% decline in the ability for a woman to get pregnant from age 30 to 40 and every two years [after 40] it is cut in half,” says Grifo. “Then pretty much by the age of 44 anyone who is achieving pregnancy is using an egg donor and not talking about it. Very few women over the age of 44 get pregnant with their own eggs.”
Age plays a key role because the number of available eggs drops dramatically as a woman ages, as does the chromosomal normality of each egg. 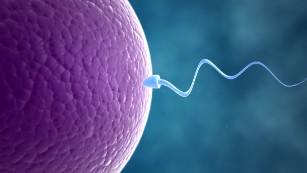 “Women have seven million eggs as a fetus, 1 to 2 million when they are born, 600,000 went they hit puberty,” explains Grifo. “And every month she wastes 500 eggs to ovulate the one good egg, and many times it’s not a good egg. By age 40, 97% of the eggs she had at puberty are gone.”
Men, on the other hand, are constantly making fresh sperm every 90 days, said Grifo, so those cells remain young and healthy even though the man is older.
“So while there is a measurable decline in male fertility with age, it’s very modest,” said Grifo. “Whereas with women it’s very clearly defined. Pretty much over the age of 44 female fertility approaches zero.”

3) What causes infertility in men?

The most common reasons for male infertility are issues with how the testicles create and dispense sperm, hormone imbalances, or blockages in the male reproductive organs. Obstructions in the tubes that transport sperm from the testicles to the penis, either naturally occurring or via vasectomy, account for up to 20% of male cases of infertility.
A complete lack of sperm is the factor for about 10% to 15% of male infertility; low sperm counts and malformed sperm are more reasons. Physical issues, such as injuries to the testicles, radiation and chemotherapy, the failure of testicles to drop, or an enlargement of veins in the scrotum called varicocele, can all contribute as well.
Diabetes can cause erectile dysfunction and ejaculatory issues due to a reduced blood flow from vascular damage; thyroid issues such as hyperthyroidism can affect sperm count and mobility. Hormones affect sperm production, too.
“Endocrine abnormalities can cause it, low testosterone can be a factor, there are genetic causes of infertility in men and some of it is chromosomal, in that they are missing a piece or have extra chromosomes,” said Grifo. “Infectious disease like mumps or sexually transmitted diseases and infections can have an impact on sperm production as well.”
Even if the testicles produce viable sperm, there can be issues in how well a man’s sperm moves to accomplish its goal of fertilization. Sperm can swim too slowly, or not at all, basically dying before they reach the female egg.

4) What type of female infertility is easiest to address?

According to the National Institute of Child Health and Human Development, women with ovulation issues are most likely to see success from fertility treatments.
“If women are not ovulating, it’s a relatively simple fix,” said Grifo. “You can usually fix it with oral meds that induce ovulation. There are also injectable forms. If that’s the only problem, it’s a very effective form of treatment.”
Surgical interventions are less successful in achieving pregnancy. Surgically removing patches of endometriosis — a painful condition where the cells that line the uterine cavity grow into the tissues outside of the uterus — can double the chances for pregnancy, but success rates for surgical repair of the fallopian tubes are low.

For reproductive health, we recommend the gel drink plus A-BetaCarE (for both men and women). Aloe Drinking Gel and A-BetaCarE aid fertility and, if the lack of conception is due to the male partner, he should also take Nature-Min, which, along with A-BetaCarE, is very good for male fertility. Also, Forever B12Plussupports fertility and is excellent for both when you’re trying to conceive and also for when you’re pregnant for both you and your baby.

Royal Jelly is fantastic (if the problem is with the woman) if you’re trying to conceive (helps produce eggs regularly, and has resulted in a conception on many occasions!).Maca, A Beta-CarE (Selenium and vitamin E), Gingko, Royal Jelly – vits E and C help overall reproductive health. Folic acid, Omega 3, zinc, selenium, vit B6 and manganese are known to support fertility.

We Hope this Article really blessed you

Your number one Health and Wellness Solution. We are also Forever Living Products online market place. We are committed to delivering natural and exceptional products to you at the comfort of your home.
Menu
Our Location
21/22 Aromire Avenue, Off Adeniyi Jones Ikeja, Lagos +100010

close
Start typing to see posts you are looking for.